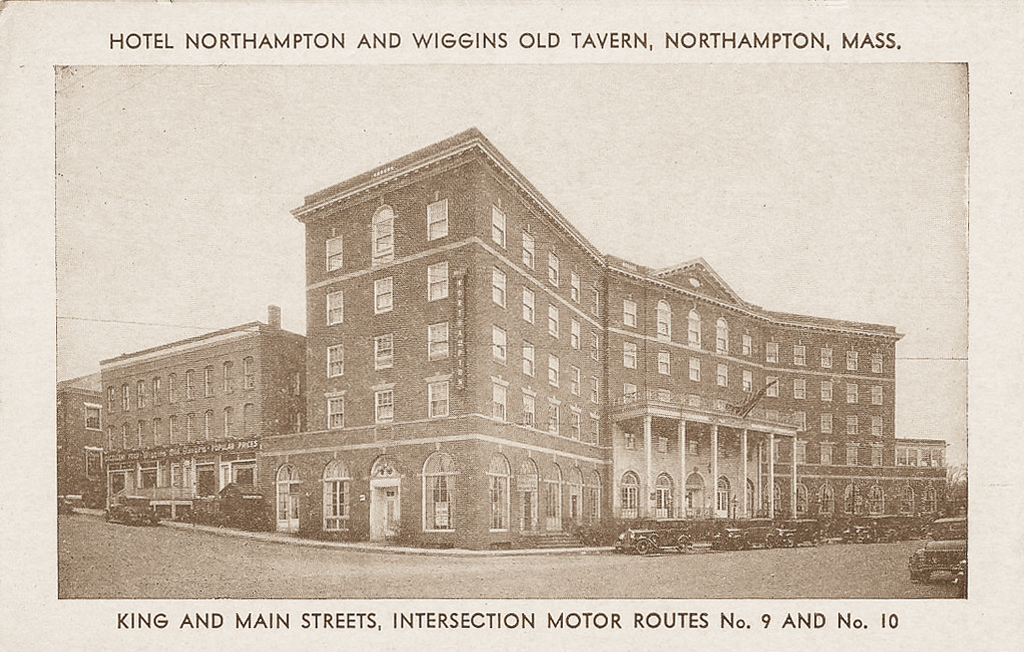 You are here: Home / History

The history of our hotel begins with Lewis Wiggins, an entrepreneur who had a great interest in preserving the Colonial Revival theme when constructing the Hotel Northampton in 1927. An integral element of Wiggins’ concept was to achieve museum status for the hotel’s furnishings, and to this end he acquired antiques both for the hotel and for his own collection. Many of these antiques still grace our hallways, restaurants, and lobby. The collection was added to daily, and by 1937 Wiggins employed a full-time antiquarian curator with a staff of up to 15. Two staff members were assigned only to mingle with the guests and discuss the hotel and its antiques.

Seeking a way to expand the hotel’s dining facilities as well as to offer “greater entertainment to my guests,” Wiggins purchased the Moriarty building next door. He was determined “to construct faithfully an Early American Tavern with the atmosphere and appearance of an old tavern as it was in the days of our ancestors.”

Some 141 years earlier in 1786, Benjamin Wiggins, a direct ancestor of Lewis Wiggins, opened Wiggins Tavern in Hopkinton, New Hampshire. During the Tavern’s time, Benjamin Wiggins established a reputation with both travelers and area residents for the finest food and spirits in the region.

Lewis Wiggins eventually decided to move the old tavern to the Hotel Northampton. Meticulous attention to detail was taken in reassembling the tavern in its new home. Carved paneling, hand-hewn beams, and stone and brick hearths were all carefully reconstructed. Antiques from both the original tavern and from other parts of New England were painstakingly collected to finish the restoration of the interior. Today, the tavern is much as it was over two hundred years ago when Ben Wiggins greeted his guests at the door and served them his famous American fare and baked goods.

Through its 200-year history, Wiggins Tavern has been host to visitors from all over the world. Among the many travelers who have stopped here for a relaxing meal are Eleanor Roosevelt, Jenny Lind, Herbert Hoover, Calvin Coolidge, Dwight Eisenhower, John F. Kennedy, and Richard Nixon. During World War II, U.S. Navy Waves billeted at Smith College were marched down Main Street three times a day for their meals at Wiggins Tavern. According to one of the Waves, there were two great things about being stationed in Northampton: “You survived the war, and you got to eat at Wiggins Tavern.”

Famous Guests that have stayed at the Hotel Northampton include…